The Swiss Family Robinson (German: Der Schweizerische Robinson) is a novel by Johann David Wyss, first published in 1812, about a Swiss family shipwrecked in the East Indies en route to Port Jackson, Australia. 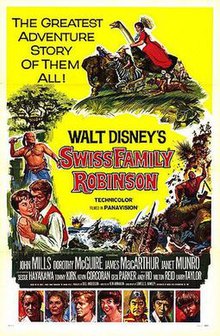 It is very well known that, some years ago, Counsellor Horner, a Swiss, made a voyage round the world in the Russian vessel Le Podesda, commanded by Capt. Krusenstern. They discovered many islands, and, amongst others, one very large and fertile, till then unknown to navigators, to the S.W. of Java, near the coast of New Guinea. They landed here, and to the great surprise of Mr. Horner, he was received by a family who spoke to him in German. They were a father and mother, and four robust and hardy sons.

Their history was very interesting. The father was a Swiss clergyman, who, in the Revolution of 1798, had lost all his fortune, and had determined to emigrate, in order to seek elsewhere the means of supporting his family. He went first to England, with his wife and children, consisting of four sons, between the ages of twelve and five. He there undertook the office of missionary to Otaheite; not that he intended to remain on that uncivilized island, but he wished to proceed from thence to Port Jackson as a free colonist. He invested his [pg vi] little capital in seeds of every description, and some cattle, to take out with him. They had a prosperous voyage till they were near the coast of New Guinea, when they were overtaken by a frightful storm. At this period he commenced his journal, which he afterwards committed to the care of Mr. Horner, to be forwarded to his friends in Switzerland.

Some time before, a boat from an English vessel, the Adventurer, had visited them, and the father had sent the first part of his journal by Lieut. Bell to the captain, who remained in the vessel. A violent tempest arose, which continued some days, and drove the Adventurer from the coast. The family concluded the ship was lost; but this was not the case, as will be seen in the conclusion.

The tempest had raged for six days, and on the seventh seemed to increase. The ship had been so far driven from its course, that no one on board knew where we were. Every one was exhausted with fatigue and watching. The shattered vessel began to leak in many places, the oaths of the sailors were changed to prayers, and each thought only how to save his own life. "Children," said I, to my terrified boys, who were clinging round me, "God can save us if he will. To him nothing is impossible; but if he thinks it good to call us to him, let us not murmur; we shall not be separated." My excellent wife dried her tears, and from that moment became more tranquil. We knelt down to pray for the help of our Heavenly Father; and the fervour and emotion of my innocent boys proved to me that even children can pray, and find in prayer consolation and peace.

We rose from our knees strengthened to bear the afflictions that hung over us. Suddenly we heard amid the roaring of the waves the cry of "Land! land!" At that moment the ship struck on a rock; the concussion threw us down. We heard a loud cracking, as if the vessel was parting asunder; we felt that we were aground, and heard the captain cry, in a tone of despair, "We are lost! Launch the boats!" These words were a dagger to my heart, and the lamentations of my children were louder than ever. I then recollected myself, and said, "Courage, my darlings, we are still, above water, and the land is near. God helps those who trust in him. Remain here, and I will endeavour to save us."

I went on deck, and was instantly thrown down, and wet through by a huge sea; a second followed. I struggled boldly with the waves, and succeeded in keeping myself up, when I saw, with terror, the extent of our wretchedness. The shattered vessel was almost in two; the crew had crowded into the boats, and the last sailor was cutting the rope. I cried out, and prayed them to take us with them; but my voice was drowned in the roar of the tempest, nor could they have returned for us through waves that ran mountains high. All hope from their assistance was lost; but I was consoled by observing that the water did not enter the ship above a certain height. The stern, under which lay the cabin which contained all that was dear to me on earth, was immovably fixed between two rocks. At the same time I observed, towards the south, traces of land, which, though wild and barren, was now the haven of my almost expiring hopes; no longer being able to depend on any human aid. I returned to my family, and endeavoured to appear calm. "Take courage," cried I, "there is yet hope for us; the vessel, in striking between the [pg 003] rocks, is fixed in a position which protects our cabin above the water, and if the wind should settle to-morrow, we may possibly reach the land."

This assurance calmed my children, and as usual, they depended on all I told them; they rejoiced that the heaving of the vessel had ceased, as, while it lasted, they were continually thrown against each other. My wife, more accustomed to read my countenance, discovered my uneasiness; and by a sign, I explained to her that I had lost all hope. I felt great consolation in seeing that she supported our misfortune with truly Christian resignation.

"Let us take some food," said she; "with the body, the mind is strengthened; this must be a night of trial."

Night came, and the tempest continued its fury; tearing away the planks from the devoted vessel with a fearful crashing. It appeared absolutely impossible that the boats could have out-lived the storm.

My wife had prepared some refreshment, of which the children partook with an appetite that we could not feel. The three younger ones retired to their beds, and soon slept soundly. Fritz, the eldest, watched with me. "I have been considering," said he, "how we could save ourselves. If we only had some cork jackets, or bladders, for mamma and my brothers, you and I don't need them, we could then swim to land."